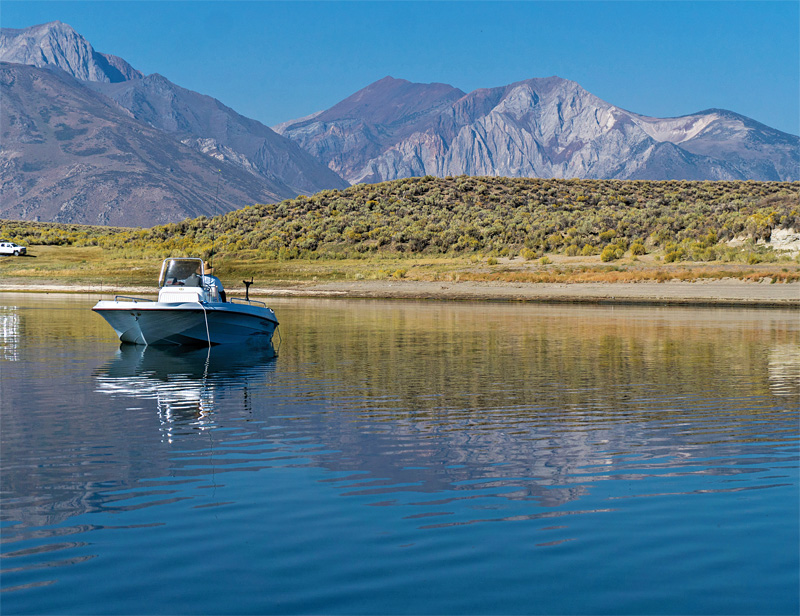 Crowley Lake is a popular spot for fishing, and is considered by many to be the water other Eastern Sierra fisheries are measured against. PHOTO BY JOSH WRAY/MONO COUNTY TOURISM

For a region that historically never had trout of any kind south of Conway Summit, the Eastern Sierra Nevada has become known across the country for the quality trout fishing that exists there now. Here are the five best spots for anglers interested in landing a quality trout.

For Eastern Sierra Nevada anglers, Crowley Lake is the water all other fisheries are measured against. The Crowley watershed has a complex regime of regulations, an aggressive and creative stocking program, and an increasing number of wild trout. Throughout the long fishing season (last Saturday in April through Nov. 15), Crowley Lake produces more and bigger fish than all other waters in the region.

For the first half of the season, Crowley Lake is open to all types of fishing – bait, lures, and flies – and it has a five-trout limit. From August 1 through the close of the season, Crowley has a special two-fish, 18-inch minimum size bag limit and anglers are restricted to using artificial lures with barbless hooks – fondly known as the trophy season.

Surveys done by the Department of Fish and Wildlife show that the average size of the trout caught opening day of the season is 13 to 14 inches most years with those fish weighing in at a pound. Most of those are fish that were planted by the DFW the fall before as three- to six-inch trout and have grown that size on the rich food supply in the alkaline reservoir. Each year the state plants around a half-million or more small trout in the fall, and they grow into trophy sizes quickly. By the end of their first year in the lake, the fish are mostly 15 to 17 inches long and approach two pounds. By the next spring, they are 18 to 20 inch trout in the three-pound class; and by their third year in the lake, they can be four to five-pound class trout.

The DFW now plants the lake with at least two varieties of rainbow trout, Lahontan cutthroat trout, and brown trout in some years. The browns and cutthroats show a proclivity to be longlived and when trout over six pounds are caught – and there are more of those fish than in decades – they are these two species.

No Eastern Sierra fishing career is complete without at least a few days of fishing this incredible reservoir, and for fly-anglers, it is a nirvana. 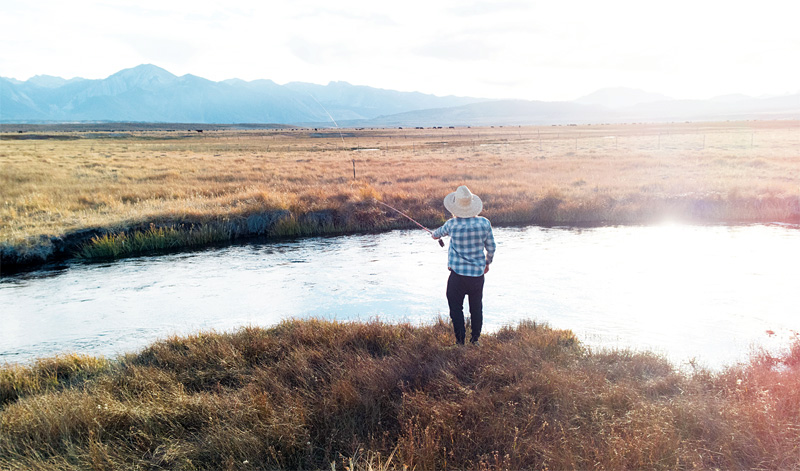 The Owens River is a popular spot for trout fishing.
PHOTO BY JOSH WRAY/MONO COUNTY TOURISM

If Crowley Lake is the hub of all Eastern Sierra trout fishing, the Owens River is Crowley’s main artery and a tremendous fishery in its own right. The Owens River managed with a complex set of rules on gear and bag and anglers need to read these regulations (which are too lengthy to summarize here).

There are three distinct parts of the Owens. The upper river above Crowley Lake is a meadow river that cuts through an ancient caldera. Most of the season, the river has a good population of wild trout from six to 12 inches long, but runs of spawning trout out of Crowley pack the river with rainbows, cutthroats and browns from 15 to 26 inches long and weighing up to eight pounds spring and fall. There is also a short stretch right below the Benton Crossing bridge that gets planted with hatchery trout throughout the summer.

Between Crowley Lake and Pleasant Valley Reservoir, the Owens River flows through a deep gorge that can only be reached by hikes in from the rim or the two ends of the canyon where there is road access. The river here is a series of deep runs lined by tules and canyon walls. While most of the trout are wild eight to 10 inches, the canyon is known to hold some huge brown trout. Fishing “the gorge” is usually done in solitude.

Below Pleasant Valley Reservoir, the Owens River flows through the broad Owens Valley all the way (with recent new flow allotments) all the way the Owens Dry Lake. The Bishop to Independence stretch is a wonderful trout fishery that is best fished via drift boat because the banks are so brushy. Guide services in Bishop offer these floats year-around and the average rainbows and browns are one to two pounders with some bigger browns tucked up beneath deep undercut banks. Below Independence, the river becomes a warm water fishery with bass, bluegill, and catfish in its pools and backwaters. There is a good smallmouth bass fishery in this stretch of river, but that is a secret.

It is amazing this river can be a major component of the Los Angeles City water supply and still provide incredible fishing along its whole length. 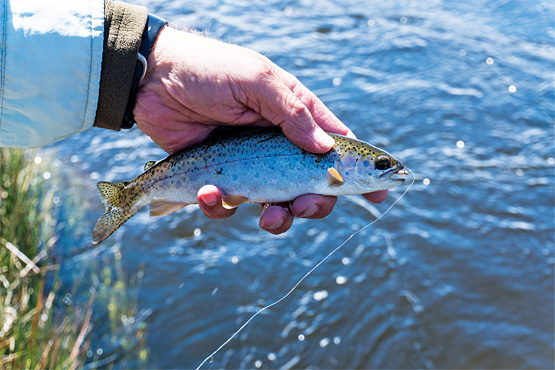 The Owens River is a popular spot for trout fishing. PHOTO BY JOSH WRAY/MONO COUNTY TOURISM

The biggest brown trout in California are caught each year in Upper and Lower Twin Lakes out of Bridgeport. So far in 2016, the biggest was a 17-pounder caught and released from Lower Twin. A brown trout just under 10 pounds won the opening day derby.

These two lakes have been producing humongous brown trout for decades. The state record brown is a 26-pound, eight-ounce fish that was caught the beginning of trout season in 1987 by Danny Stearman of Bakersfield from Lower Twin.

If your goal is a giant brown trout, there is no better place in California. That trophy fish will be taken at first or last light by an angler who is willing to troll big, rainbow trout-like lures for weeks on end without getting a strike. It will probably be caught early in the spring – the first week or two of trout season – or late in the fall when the big fish are staging at the creek mouths for the spawn. Is that you? 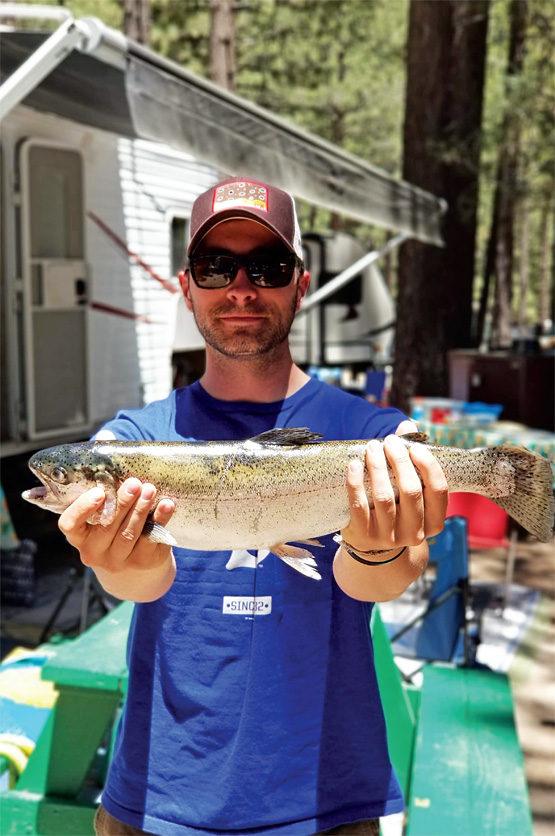 Daniel King shows off his catch at Twin Lakes near Bridgeport. COURTESY PHOTO

The East Walker River below Bridgeport Reservoir is one of the finest brown trout fisheries in the entire West. Protected with a one-fish, 18-inch minimum size limit and gear restrictions that mandate barbless hooks, the river abounds with big fish over that minimum size, and most anglers practice complete catch-and-release fishing.

How good is the fishing? Fly-fishermen frequently report 20 to 30 fish days and at least a couple of the trout topping the 20-inch mark. In September and October, when the brown trout stack up in the first mile of water below Bridgeport Reservoir, six to eight-pound trout are caught and released daily.

If you want to fish in total solitude on this river, you can drive downstream and toss flies on the publically-owned Rosaschi Ranch stretch in Nevada. You will likely not see another angler during the fall on this stretch. The best part is that you can get short-term Nevada licenses at Ken’s Sporting Goods in Bridgeport. 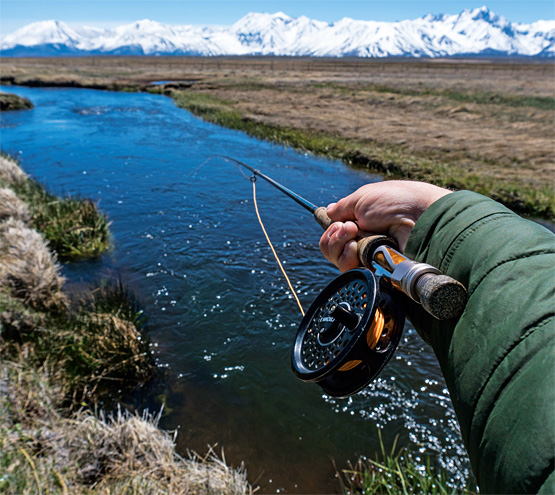 This could be your view as you fish in the Eastern Sierra. PHOTO BY JOSH WRAY/MONO COUNTY TOURISM

If you hear someone in Bridgeport say that he was fishing in Labrador, Canada, when showing someone a photo of a huge brook trout, it is an inside joke. It is code that means he was fishing nearby Kirman Lake, which grows brook trout the likes of which most people think are only found in remote Canadian waters.

Because of an incredible aquatic food base (mostly scuds), brookies planted in Kirman lake as fingerlings quickly grow into “air-brushed footballs.” A 14-inch fish will have a 12-inch girth and weigh nearly three pounds. The 16 to 18-inch brookies will weigh four to six pounds. Cutthroat trout, which are also planted in the lake now, don’t get as fat as the brookies, but sleek 26-inch fish that weigh eight pounds have been landed.

The limit is two-fish over 16 inches here, and you have to use barbless artificial lures. You also have to walk or mountain bike about two miles from Highway 108 (just west of Highway 395 at Sonora Junction). The reedy shoreline makes float tubes a wise option. The best fishing is spring and fall, but it’s worth the trip.

While fishing is always fishing, these five spots are the best options in the region.