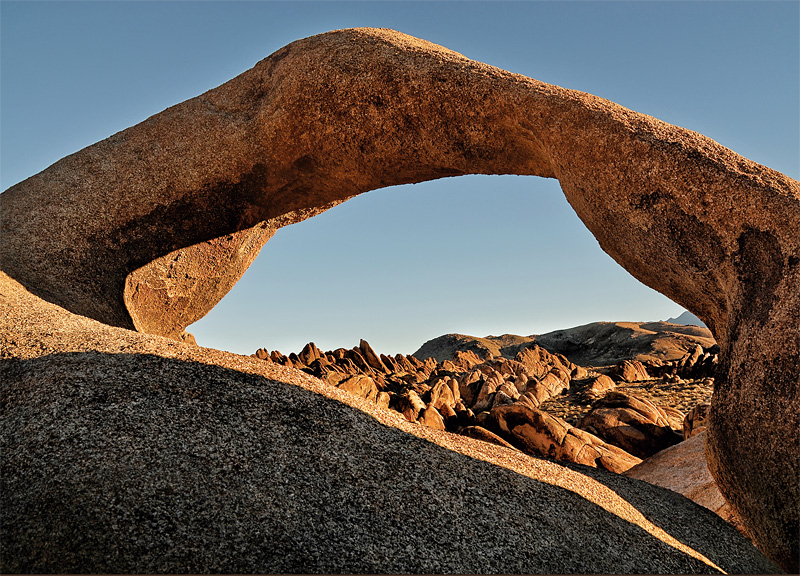 If you are looking for unique landscapes to explore and photograph, the Eastern side of the Sierra Nevada has many options. Three easily accessible locations are Fossil Falls, the Alabama Hills, and the Ancient Bristlecone Forest in the White Mountains east of U.S. 395.

Just north of Inyokern/Ridgecrest on 395 is Fossil Falls. Ancient lava flows of basalt and obsidian create a black rock waterfall where the Owens River once flowed.

Waves of solid stone that were once flowing lava and then carved by water and wind over thousands of years may not be what you would expect to find in a desert setting. Once covered by massive lakes and rivers, the dry desert still covers a lot of geothermal activity and underground aquifers. Cinder cones and hot springs dot the landscape all along U.S. 395.

Truly a trip back in time geologically and historically, along the trail to the Falls are rock circles that were once locations used by Native Americans to camp, and you can often find obsidian arrowheads (don’t pick them up; they are protected). You might also discover ancient rock art or petroglyphs carved thousands of years ago by native Shaman traveling in this area. Watch for local critters like birds of prey, rattlesnakes, coyotes and other desert animals who might just show up to pose for your camera.

To get there take the marked paved road past Pearsonville to the Bureau of Land Management parking lot. From there to the falls is a short hike through the rocky terrain (this trail is not handicap accessible) with primitive camping available. To learn more about this geologic eccentricity here is a link to the BLM website for the area: http://www.blm.gov/ca/st/en/fo/ridgecrest/fossil.html.

Next stop for a unique landscape is the Alabama Hills just west of Lone Pine off Whitney Portals Road.

A focal point for Native American life for over 10,000 years, this area of unique rock formations and home to miners is now a movie backdrop for the Hollywood filming industry for movies, commercials and TV shows beginning in the 1920s and continuing today. The area is named after the C.S.S. Alabama, a Confederate warship responsible for wreaking havoc during the Civil War. Prospectors sympathetic to the Confederate cause named their mining claims after the Alabama and the name just stuck.

Formed by a process called uplifting and chemical erosion, these rounded stone monuments are a sharp contrast to the massive granite peaks chiseled by glaciers of the Sierra Nevada. There are over 100 stone arches scattered through the area, the largest of which is the Mobius Arch just off Movie Road. Make it a treasure hunt to find them all, and you can find maps online to make it a little easier. Try light painting and photographing the Milky Way after dark against these unique rock formations. After Yosemite, the Alabama Hills was one of Ansel Adams’ favorite shooting locations. Check in at the Lone Pine Film Museum in Lone Pine for tours of the locations he used.

Just past Big Pine, take a right on Highway 168 which will take you up to about 12,000 feet in the White Mountains to Schulman Grove which is where you will find the visitors center for the Ancient Bristlecone Pine Forest.

Although the pines are found in 6 western states, this grove of Bristlecone Pines is home to the oldest known trees on Earth. Some of these trees are over 4,000 years old and still going strong.

At an elevation of over 10,000 feet, the oldest trees grow on outcrops of dolomite, which has a very low nutrient content, but a higher moisture content than the surrounding sandstone. The dolomite reflects more sunlight than other rocks, contributing to cooler root zones, and saving moisture. The growing season for the Bristlecones is so short, they have developed survival strategies to survive, including very slow growth, sometimes adding only 1/100th of an inch per year. To learn more about these amazing trees and read about Dr. Edmund Schulman, the man who discovered the Bristlecones, you can go to www.sonic.net/bristlecone/intro.html.

Because of the elevation, this forest is only open through the summer, as early as May and as late as November, depending on snowfall. You can check the recorded information line at 760-873-2500 for current road conditions and visitor center information.

There are several hiking trails with interpretive signs and rest benches and if you are feeling more adventurous there is a 12- mile gravel road beyond the Visitors Center that takes you to the Patriarch’s Grove. Although not the oldest tree, the Patriarch is the largest in girth at about 36 feet across.

This forest is a photographer’s paradise! Who said you have to be young to be beautiful and photogenic!